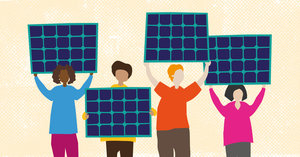 Our Save Graveney Marshes campaign has always been clear that we support solar as an energy source, but not at the cost of the environment. This means, amongst other places, putting solar on rooftops.

Join 10:10, Greenpeace and others in telling the government what you think about retaining the export tariff incentive – details below:

If you’re a fan of solar power, nine out of ten Brits are on your side. If you want your own panels, two thirds are with you.

But over the last few years the government has removed support for solar wherever it can.

Incredibly, the government is now planning to stop guaranteeing that people will be paid for the surplus energy their solar panels produce. Instead, in effect, the power will be donated for the energy companies to sell on.

We could have as little as the next fortnight to turn this around. Write to you MP now and tell them they need to take urgent action.